Memories of a Seagull (not the bird)

I’m still printing old negatives — and will be for quite a while.  It’s been a lot of fun rummaging through old contact sheets and once in a while finding a “Why didn’t I print this a long time ago?” negative.  Here’s one of them from 1990: 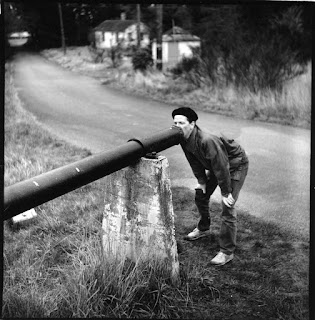 I like a lot about this photograph.  It’s certainly surreal (the great Brassai once said: “There is nothing more surreal than reality itself.”).  It is totally out-of-place and out-of-time:  there are no clues about where or when it was taken.  My more formally-oriented friend, Doug, tells me that the composition is excellent.  The shallow depth of field pops the main subject out of the background.  The out-of-focus area is lovely.
I consulted my loosely-kept film log and found that it was taken in May 1990 and that the place was Fort Worden — a retired coast artillery fort in Port Townsend, now a state park and home to the NFP Centrum Foundation.  Ah — for several years I taught a spring-break workshop for high school students there.  The gentleman in the photograph was (likely still is) a professor of music at Evergreen State College.  He and his students had discovered that singing exactly the right tone into this pipe would make it resonate like an organ pipe.
Next question.  Was I really using a 2¼ camera in 1990?  I certainly do now, both a vintage Rolleiflex TLR and a Mamiya 6.  I consulted my loosely-kept journal and it reminded me of a nearly forgotten camera.  Enter the Seagull.  In 1989 I decided to give medium format a try.  Not wanting to spend a lot of money, I bought (as I dimly recall through Maine Photographic Workshop) for $110 a Chinese-made copy of the Rolleiflex, the Seagull.  Checking Amazon a few minutes ago I found that they are still available for a bit shy of $500. which is nearly exactly on the dot adjusted for inflation.  I really liked 2¼ and the Seagull.  A year later a friend offered to sell me a 1955 Rolleiflex in excellent condition and I jumped at it.  I sold the Seagull to a friend who, like me, wanted to try medium format at a modest entry cost.
Why?  Well, the Seagull seemed to work just fine.  The viewfinder was bright — I had to put a third-party screen in the Rollei to make it as bright.  The negatives that I was getting from the Seagull were certainly pretty (see the above evidence).  That said, everything else about it was not so satisfying.  The film wind and focus were very stiff and made a grinding noise.  The aperture and shutter speed adjustments were stiff.  The imitation leather covering on the outside started to peel off.  The lens was annoyingly subject to flair (see right edge of the print above).  When you opened the camera to load film it looked like they started with a block of aluminum, adzed out everything that didn’t belong in the inside of a camera, but didn’t bother to finish the edges.  Perhaps they have improved their manufacturing standards in the intervening 26 years (but since the price has only kept up with inflation, perhaps not).


But still — the negative of the print above is really pretty and it kind of has the look of the 1930’s that I like very much.  Maybe just luck on that roll of film?  Maybe a simpler, less modern lens design?  Maybe my imagination?  I should email the friend to whom I sold the Seagull and see how it worked for him.
Posted by ronfstop at 11:59 AM