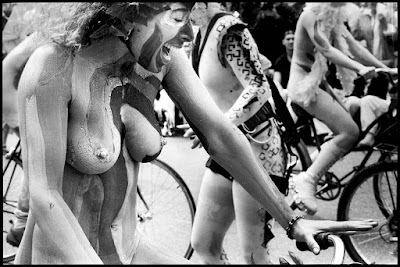 Posted by ronfstop at 6:41 PM No comments:

The case of the vanishing craftsman. 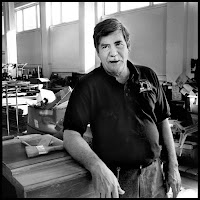 While looking for a negative I happened to see this one as it went by.


A few years ago (well, actually 13) Photographic Center Northwest announced that they were sponsoring a workshop led by Bruce Davidson.  I’m not that keen on workshops and a cheapskate to boot but I couldn’t turn down the opportunity to spend a weekend with one of my heroes, the photographer who did “”.  I was in for something else so I dropped in to PCNW to register for it.


Erin-at-the-counter signed me up and gave me the prospectus for the workshop, scheduled for three weeks hence.  She told me to look at the prospectus right away since there was some homework assigned before the time of the workshop.  The advance homework ran like this:


Find a potentially interesting situation involving a person or people that you have never met.  Introduce yourself and chat them up, explain what you are doing, and shoot a couple of rolls of film.  Make work prints of the best few of your negatives and bring them to the first day of the workshop.  Make extra copies to give to the person or people you photographed.


I walked down 12th from PCNW towards to catch a downtown bus.  At the corner of 12th and there stood (it has subsequently been demolished and replaced with an upscale retail/condo building) a commercial building that had once housed some kind of light-industrial manufacturer.  The street level windows on 12th and on had been painted white and there was only one door onto the street – I had never seen it open or seen any lights on inside.  That day the lights were on, visible through the upper panes of glass in the high window frames, and the door was open.  Naturally, I peeked in.


The large, high-ceilinged room was filled with a mixture of some kind of industrial machinery towards the back and a whole lot of old but expensive looking furniture towards the door – tables, sideboards, bookcases, chairs, and chests of drawers.  One man was removing old varnish from a piece of furniture with the air of a person who very clearly knew what he was doing.  He saw me, put down his tools, and came over to say hello.  Well, said I to myself, I have a camera on my neck, he looks friendly, and this looks promising.  And it was.


He introduced himself as Silas; I introduced myself and we shook hands.  He told me that the machinery at the back was industrial sewing machines – that’s what was manufactured there at one time.  The owner of the business still bought and sold such machinery and that was his stock.  He had an employee who repaired and refurbished the sewing machines.  As a sideline, the owner also bought and sold high-quality antique furniture and his job was doing needed repairs and refinishing the pieces.  They had recently acquired a huge lot of furniture and he had a couple of months work ahead of him to get it ready for sale – working there by himself, he was glad to have somebody to talk to a bit.  He showed me a few of the pieces that he had refinished and they looked like something out of a museum.


We chatted for a while longer while I photographed and then he went back to work while I photographed some more.  I told him I would bring him some prints and he assured me that he would be there every weekday for several weeks.  I left feeling that my homework was ready to develop and print and all was well.


A few days later I got an announcement from PCNW that they had cancelled the Bruce Davidson workshop for lack of enough registration.  Damn!  But I developed the film and made work prints to take back to Silas.


Problem was – he wasn’t there.  Over the following couple of weeks I went by several times at several different times of day.  The lights were off and the door was locked.  Finally I scrambled up on a wide windowsill to peek through a bare spot on the lower window and saw nothing but an empty room – no machines, no furniture, no tools.  There was no sign on the door saying “call this number for….”.  Damn, again!


I have no idea what happened nor could I find any information about the business that he described to me.  My fantasy is that it only existed because I needed it and that when the workshop was cancelled so was it.