"Outwin"? Ever hear of it? I hadn't until the email from TAM announcing the opening came a while back.

Subtitled "American Portrature Today", it is a triennial competition sponsored by the National Portrait Gallery (part of the Smithsonian) and is juried by a panel of curators from the Portrait Gallery and, significantly, working artists. It is open to any artist, professional or Sunday only, working in any medium, in the United States. This, the 4th Outwin, drew over 2500 entrants and was winnowed down to 43 -- a size just about right for two of the north galleries at TAM. This is the first venue after it hung in the Smithsonian.

Why "Outwin"? Virginia Outwin Boucher was a passionate supporter of the National Portrait Gallery and volunteered there for nearly 20 years. She and her children endowed the competition in her honor.

I can't say that I was particularly excited by "Miss Everything", the first prize winner that illustrated the email announcement from TAM but Barbara and I were ready for a brief road trip so we took the arduous journey down I5 to see it yesterday. Three years or so back TAM received a mammoth gift of vintage and contemporary art of the American west from the Haub family (along with the money to build a new wing to house it -- wouldn't it be nice to have the loot to afford to do something like that?) and much more recently a smaller but similarly impressive gift of contemporary Northwest art from the Benaroya family (along with the money to build yet another new wing to house that). But I digress again.

Outwin 2016 includes sculpture -- including a cast glass bust -- drawings, paintings, a good deal of photography and two installations. The skill level and attention to detail throughout is exceptionally high. Most of the works are straight-up representational -- the originality demanded by the jurors achieved through content and approach rather than avant garde technique. 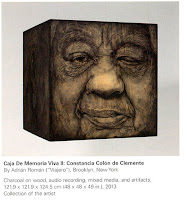 The work that strayed farthest from strictly representational was the installation Caja de Memoria Viva II. I'm not keen on installations as a rule but I'll make an exception for this one. It is housed in a large hollow cube suspended from the ceiling at a height such that the viewer can walk under it. The front/back/left/right views of a kindly, wrinkled, older man's head are done in charcoal on the sides of the box. As you walk under it you are looking up into the hollow cube that is decorated with snapshots and letters and a soft, nearly unintelligible voice speaks to you -- you are literally "inside his head".

The other installation, "A Moment in Time" is a set of 17 small photographs housed in a large, wall-mounted case -- one portrait for each decade since the invention of photography. They begin with a jewel-like Daguerreotype in a tiny, ornate case labeled "1850" and progress with the technology of photographs through ambrotype, tintype, albumen, silver, polaroid and digital (labeled 2010). Only when I read the wall tag did I realize that all the portraits are self-portraits of the artist -- costumed to match the fictional time of the photograph.

With the exception of the photographs in "A Moment in Time" all the photographs were digital prints and all but two of these were color. One of the latter, “Haints at Swamp II” was a faux toned C-print mounted behind a crystal-clear thick glass that gave it the appearance of wet-plate or even aureotype. 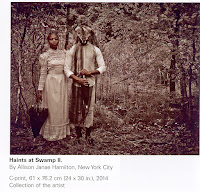 With no exceptions the pieces in this show stood on their own as portraits apart from the fame or obscurity of the sitter -- David Hockney no more nor less than a homeless African-American man on a San Francisco street corner.

Many of the portraits dealt with social issues -- homelessness, gender inequality, racial tension, transgender acceptance, mental and physical disability -- but the issues were beneath the surface of the portrait that was first and foremost an image of a human worthy of attention and respect.
Many of the artists, in their statements that accompanied the art, commented on their artistic debt to the great portraitists of the past. It was easy to see, for example, Edward Hopper's "Night Hawks" in "Audrey, 2014", Vermeer's use of side light in "Becky, June, Jessica, and Mary" (perhaps my favorite of the show), Sally Mann's ability to show childhood as both idyllic and threatening in "Mavis in the Backseat", August Sanders' respect for his subjects in "Hiede and Lilly" 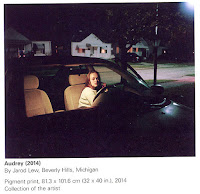 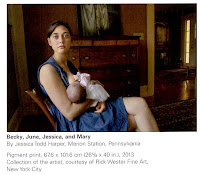 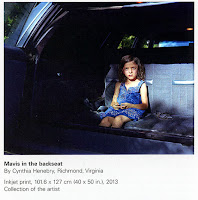 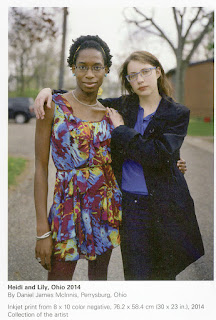 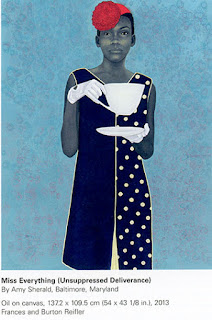 As for grand prize winner, "Miss Everything" -- it is one of those artworks that I didn't appreciate until I saw it in person. In this painting, a young African American girl in a partly polka-dotted dress, white gloves and a scarlet hat stared fixedly at the viewer while holding an outsized teacup. Her skin is grey (although my eyes obediently saw it as a chocolate brown). At a glance it resembles a "naive" work but, like Jacob Lawrence's paintings, the longer I look at it the more sophisticated and carefully done it becomes.

"Outwin 2016" is on view at TAM until May 14. The small but well-produced catalog is available in the gift shop.

I plan on seeing it again.

(and as an aside, the blogspot editor is a real pain to use -- this is hardly the format I had in mind but I'm throwing in the towel)


(I’m really on a roll on blog posts — that’s the influence of a couple of snow days last week that gave me the unexpectedly uncommitted time to edit several latent posts.)
A while back, well 2013 to be truthful, I wrote a post grumbling about the MFA show at the local flagship university and how much more to my taste was the "thesis" project show at Photographic Center Northwest (PCNW). I found the work there to be a good deal closer to the mainstream and nowhere close to attempting (and failing) to be innovative and original.

In the interim between then and now the advisors at PCNW have seemingly changed their approach. The thesis projects that are the capstone of their certifcate program run to the conceptual and introspective -- characteristics that in my opinion are not well addressed by photography.

Moreover the number of students finishing a certificate is dwindling. Only four were in the most recent (July 2016) show. I suspect that the decline in numbers is strongly related to the fact that a prominent local aerospace company changed its policy on employee education benefits to exclude anything not directly related to job skills. But I digress.

I went to the opening of the show and it was a cheerful party with a goodly crowd -- much bigger than I expected.

Two of the four projects in the most recent show were conceptual -- one of these involved large panels of cyanotype material exposed by laying them in the shallows at the edge of a Salish Sea beach. The lapping of the saltwater and the sunlight partly filtered through the water yielded an abstract pattern. The panels were hung without flattening so that the wrinkles in the paper were intended to suggest the lapping of the waves.

The third project was very, very personal and was undoubtedly meaningful to the artist.

The final project was a series of carefully staged and beautifully executed portraits of Jewish women. It was intended to comment on the place of women in the artist's own conservative Jewish community. They were sweet, loving, respectful (too big for my taste) color portraits printed on Japanese rice paper then coated with beeswax that gave them a slightly muted, dreamy look and a vague halo around the highlights. The content -- commentary on women's roles in the community -- wasn't obvious to me as an outsider but the prints were very appealing.

Talking to several of the other guests, the unusual size of the crowd was driven by members of the artist's community who had come to congratulate her and to see how her project turned out. They were delighted with it, as was I, and several of her pieces already proudly wore red dots. Nothing from the other projects had been sold by the time I left.

On the subject of sales -- and pricing -- the pieces in this show were priced in the several hundreds to a couple of thousand dollars. Well, that explains the dearth of sales except to the subjects or families thereof of the portraits. I later discussed the issue of pricing with an experienced arts administrator who explained it all to me. It seems that art speculators (oops, collectors) haunt graduation shows hoping to snap up an early work by a graduate that they believe will turn into a hot market item. Ah. Perhaps pricing to that potential buyer is a good idea if the show is of MFA graduates from Yale but I'm pretty sure that it more often merely gives the freshly-minted graduates an inflated expectation of the market value of their work.

Ray Bidegain, an established Portland photographer, prices his lovely platinum prints to sell -- in the range of $250 matted -- with the goal of making them available to a wide audience. As a result, he sells a lot of them. He openly says that when he can't keep up with printing them then, and only then, will he raise his prices.

LensWork’s Brooks Jensen sings the same song — saying that if you want your work to sell then it needs to be priced at a point that appeals to an audience beyond the wealthy collector.

My friend Katrina for many years did stunning underwater photography. Her large, color prints of tiny sea creatures were expensive. The same images in smaller sizes, on greeting cards, refrigerator magnets, bookmarks ratcheted the price down to a few tens of bucks, a few bucks — or less for a bookmark. Do you want to guess where most of her income came from?

While looking for something else I found this post that I wrote and then forgot to post. (sigh)

Posted by ronfstop at 3:46 PM No comments: