Sometimes it is Just Too Easy

I spent most of yesterday slaving over a hot tray of developer (metaphorically speaking since it was at room temperature).  I made two prints.  One was, well, difficult – not quite at the level of “Note to Self” (January 19 blog post).  I am happy with the result and I suspect that the person who bought the print will be, also. 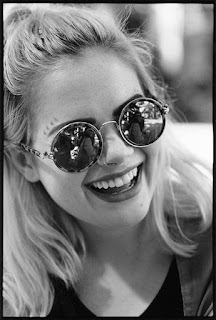 The other print, this one, was a different story.  I went to the Pride Parade in last Sunday.  As always there was a monster crowd gathering along well before the parade was scheduled to begin.  I was early enough to be able to score a place to stand in the shade near .  Immediately to my left were three young women – obviously friends – who were bantering, laughing, and generally having a good time.  After the parade started I couldn’t resist – the conversation with one of them went like this:

Me:  May I take your photograph?
Laughing girl:  Sure!  Do you want me to look at the camera?
Me: No, just go back to watching the parade.

She did.  I did -- I took three frames.  My reflection is in her mirrored sunglasses – they are purple, by the way.  I gave her my card.  I hope she emails me so I can send her a print.

This is a full-frame, straight print with a #2 filter (well, I did burn the upper right corner a bit), 50mm lens.

Sometimes it is just too easy.
Posted by ronfstop at 11:11 AM No comments: