A couple of weeks back we went to a very funny musical play (that I shall not name) showing at an excellent theater (that I shall not name).  Its original setting had been changed to take place in a cowboy bar.  The theater was configured with a flat floor and audience on three sides.  We had first row seats (our favorite) so our feet were nearly on the edge of the stage.  When the house opened and the audience trooped in, the costumed actors were already on stage playing guitars, etc., singing, and chatting up the audience – that was invited to come on stage.  In fact there was ad hoc seating on stage and members of the audience were invited to stay on stage – or come and go – during the play and the actors were prepared to shoo them out of the way when needed.  There was also an open bar at one side of the set and the audience was invited to visit the bar at any time during the play.  With one thing and another it was a goofy, unconventional approach to theater that promised to be a lot of fun – and it was. 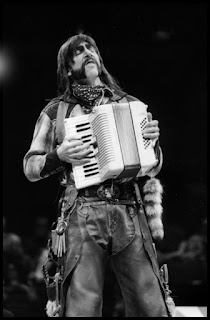 There was not the “Welcome to …” nor was there the customary “Recording devices and photography are not permitted.” announcement.

Which brings me to PWCs – people with cellphones.  As cheerful audience members swarmed over the stage there was the inevitable quick draw of smart phones (some with selfie sticks) and even a couple of tablets.  Sitting in my front row seat I thought “Well, they are ok with photographs; at least until the performance begins.”  I had been out photographing earlier in the day so my 35mm film camera was in my shoulder bag.  I got it out and got exactly four frames before an usher, also in costume, rushed over saying “No photographs!  No photographs!”  I lowered my camera and said “What about all the people photographing with their cell phones.  Are you going to stop them, too?”  He looked embarrassed, said “No photographs.” (rather sheepishly) once more and walked back to his post.


The cell phone barrage continued throughout the show.  (sigh)
Posted by ronfstop at 7:52 PM No comments: