The long silence about my book was caused by three more months of flailing about followed by a very satisfactory launch of the finished book. The short version goes like this:

I went through it and changed all instances of "The Pike Place Market" to "The Market" -- that's ok by me; nearly everybody who has any interest it knows where The Market is. The director of the PDA had the gall to tell me that he "really didn't want me to have to do that" but wouldn't relent on the trademark license.

The 5th draft turned into the 6th draft and my friend Joe (a retired art director) went over that one with #000 sandpaper and turned it from pretty good to polished. Draft 7 went to Snohomish Publishing (good guys) for a proof and then 200 copies. It looks good -- not at the quality of Lenswork or the Vivian Maier book but still good.

The curator at MOHAI was enthusiastic about the finished product and did, indeed, want a copy of the 20 silver-print portfolio for their collection.

One of the first copies went to Lucy (daughter of Pinhas Almeleh to whom the book is dedicated) who helped me a lot with names and places. She is now on hospice care so I'm so glad that I got her a copy of the finished book while she could still enjoy it. Another early copy went to Sol at the fish market (his father opened the shop -- his grown grandson now is behind the counter.)  After I gave it to him he flipped it open and I could see tears welling up in his eyes. When I wandered by about 15 minutes later he was still leaning against the stairs up to the shop office going through it. Those two copies paid me back for the effort.

Between copies sold and given away the press run is about half gone. Since you only have to sell about 5 books to get your Lulu or Blurb book into the top 10% I'm going to consider it a best-seller. It's placed in a small local book shop where it is selling well. I've done two book signings and two show-and-tell programs. The copies keep dribbling out so pretty soon my out-of-pocket expenses will be paid and I'll stop even caring -- in fact I already have.

Now I need a new project.
Posted by ronfstop at 9:14 PM No comments: 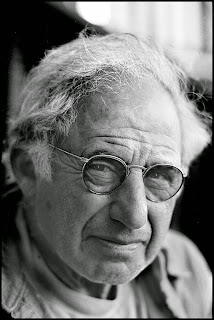 (I wrote this post just after the summer solstice and put it aside until I got around to finding the photograph I wanted to use with it.  Of course, I promptly forgot about it until looking for something else today – sigh.) 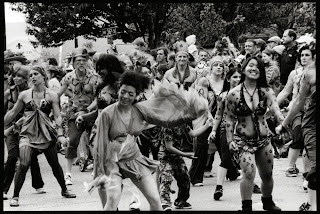 I photographed at the Fremont Solstice Parade yesterday.  This hardly qualifies as a news flash since I do so nearly every year.  The photograph above, taken a couple of years ago, pretty much sums up the ecstatic, even manic energy of the event.  This mob, accompanied by boisterous music, broke into a full-scale, whooping and yelling charge for no apparent reason about fifty feet before they reached where I was standing.  Fifty feet beyond where I was standing they were back to a normal pace, still laughing and yelling.  There are a few photographs from the parade on my website, www.ronfstop.com.
[Digression:  Just in case there is somebody reading this who is not from the area; is a neighborhood on the north side of the ship canal that connects Puget Sound to .  Formerly a blue-collar neighborhood of ship chandlers, boat builders, and mill workers, it morphed into an arts/crafts neighborhood and is in the process of morphing again into a high-tech live/work neighborhood.  This year was the 25th Fremont Solstice Festival -- an arts/crafts/music street fair and a wonderfully goofy parade.  The parade allows no motorized vehicles, no commercially-sponsored entries, and no text.  The entries all have a home-cooked flavor to them, whether a ragtag marching band, the entire student body of Salmon Bay School -- a Seattle alternative elementary school -- riding unicycles or (my all time favorite in the year that the theme was "fertility") an elaborate float that was a veritable mountain populated by a bevy of beautifully costumed and ostentatiously pregnant women.  The official start of the parade is traditionally but unofficially led by a posse of bicyclists wearing elaborate and beautiful body paint but little or nothing else.  Some even skip the body paint.  Here endeth the digression.]
I staked out a place on the curb about an hour before the parade started and struck up a conversation with the guy on my left.  Before long a youngish couple, man and woman, strolled up and joined us on my right.  The man was shirtless and, less expectedly, she was too.   I must have done a bit of a double take because she laughed.  I complemented her on getting into the spirit of the parade.  I sure meet some interesting people.
The festival organizers were expecting 20,000 or so visitors but I'll bet there were more than that present for the parade alone.  It was a zoo.  I'm a big fan of a huge, cheerful crowd but enough is enough, already.  If there were, in fact, 20,000 people there then about 5000 of 'em had one or more high-end digital SLR's, fully outfitted with oatmeal-carton-sized zoom lenses, strung on their necks. My friend Doug says that they are not photographers but PWC's (people with cameras).  They were everywhere, popping up like jacks-in-the-box or standing in the middle of the street filling up one memory card after another.  Even more numerous and intrusive were the camera-phone contingent, holding their smart phones above their heads and effectively occluding the view of anybody behind them.
I took four rolls of film -- standing at the curb and getting in nobody's line of sight.  The parade organizers provide (for a modest fee) a "press pass" that gives you the privilege of being in the street with a camera.  Next year maybe I'll get one and walk the parade route backwards, keeping moving so I won't materially get in anybody's way – at least not for very long.  (But I digress once again.)
Of the 140 or so negatives I work-printed 14 and of those there are three or four that I will print.  That's pretty slim pickings partly because I have photographed the parade many times and it takes a pretty good image to make it into the boxes with the 80 or more that I already have printed.  The other issue is that the parade is the hardest situation I have ever photographed.  It must be a lot like photographing a sporting event from the sidelines -- you have to be able to anticipate the action and even then a lot depends on luck tobring the action down your sideline.  Even at that, in a sporting event there are usually pauses; there is a set of rules to help you predict where and when things will happen; and only the most foolhardy PWC will leap onto the field and block your line of sight.  The only rule at the parade is that the participants are mostly (but not necessarily) moving from west to east.  The only pauses come when the parade stalls and then you can guarantee that some impromptu performance will spring up.  Perhaps it's more like being a war correspondent without the explosions.   I love it but photographing it is very hard work.   I can hardly wait until next year.