Where did you get the delusion …

In that remotely distant past there was a short-lived institution, “The Factory for the Visual Arts”, housed in a repurposed school building in Seattle’s Green Lake district.  It sponsored a variety of classes, rented studio space in wonderful old second-floor classrooms with tall windows, had a small performance space, and even hosted the student company of Pacific Northwest Ballet for a couple of years.

When they announced a weekend photography event I signed up immediately.  The speakers were from the university and their talks and the portfolio reviews were, well, more than a bit cerebral and not helpful to me either in finding a direction or improving my technical skills.  One of the reviewers, an MFA student at the university, said to me: “Where did you get the delusion that anybody would be interested in photographs of people that they don’t know?”  It was also obvious that she regarded those of us without an art degree as naïve and underprivileged.  These were bitter pills for a midcareer engineer with a passion for photography to swallow.

Years passed – about 15 of them – with me still looking for a direction for my photography but enjoying what I was doing and struggling a whole lot less with technique.

At that still long gone and lamented time Rainier Photo Supply, a local photographic supplies vendor, sponsored an annual Saturday event at a local community college.  It included a modest trade show and talks by local and regional photographers.  One of my favorite memories of it was a talk by Wah Lui, an excellent portrait photographer, who famously said “One of the less effective ways of becoming a photographer is to go to college.  In college you intellectualize about photography until nobody knows what the hell you are talking about.  I’m puzzled that people go to school to learn photography.  Imogen Cunningham once said that ‘as soon as one learns to print, go off on your own to make pictures.’  There is some value in workshops but after the fourth workshop it’s a waste of money.  The money would be better spent on film.”  That made me feel a lot less self-conscious about my autodidact approach to learning photography and I scribbled his statement down in my notebook as fast as I could.  He also said that one should keep an eye out for books of photography that excite you – and if you have fewer than a hundred of them in your bookshelf to look harder.  Even at that early day the count on my bookshelf was way over a hundred.  His statements made me feel a good deal better about my autodidactic approach to learning photography.

This event also offered portfolio reviews.  The reviewers were mostly photographers as opposed to curators and gallerists.  There was quite a demand for reviews so they were short, as I recall 15 minutes, and you registered for four reviews – who you got for a reviewer was pot luck.  Three of the four reviewers I drew gave me a lot of help with technique – both with the camera and with printing.  To my confusion and later amusement some of what reviewer A said and some of what reviewer B said were mutually contradictory.

Many more years passed but the “Where did you get the delusion …” statement still haunted me – and to some extent still does.

Arnold Newman photographed the likes of Igor Stravinsky seated at his grand piano.  Henri Cartier-Bresson photographed John Paul Sartre on Pont Neuf on a foggy day.  I may not know Igor or John Paul personally but I certainly know who they are.  Does that count?  Would those portraits lose their significance if the subjects were unknowns?  I think not!

In the lexicon of art a “tronie” is an image of a person but not a specific person.  Vermeer’s “Girl With a Pearl Earring” and Frans Hals’ “Merry Drinker” are tronies.  They were almost certainly painted from a live model but not as representing a specific pretty girl or specific ruddy cheeked man.  Yet a lot of people still seem to be interested in these and many other images like them. 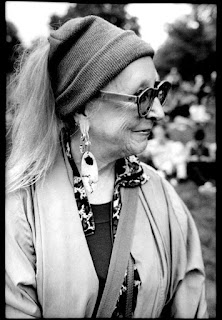 It was only after I discovered the work of the likes of Robert Doisneau, Willy Ronis, and Edouard Boubat that I realized how compelling photographs of ordinary (read: not celebrity) human beings can be.  Yes, a photograph is by its very nature much more specific than a painting.  Can a photograph of a person be a tronie and be of interest on its own without the context of “knowing”?  I hold that I do not have to know who Lella or the winemaker are in Boubat’s “Lella, Brittany France 1947” or Ronis’ “Winemaker, Gironde 1945” to be interested in them.

I don’t know a lot of celebrities (you can say that again) so what I hope for my photographs of people is that they will be tronies.  I recently showed some of my photographs, including this one, to a small group of non-photographer friends and was delighted when one said: “You make ordinary people look so wonderful.”  I’ll take it.