... And the Least Fun I Ever Had Doing a Wedding

Every photographer who does weddings — even now and then (like me) has a disaster story to tell. Mine was a wedding — the bride was a friend — that I photographed several years ago. It was held at Salish lodge at Snoqualmie falls. Picture call was for 4:00 (5:00 wedding) which is later than I like but I had sworn promise that everybody would be punctual. We were going to do the group pictures on the balcony overlooking the falls if the weather cooperated and under artificial light in the lodge if not.

Come 3:00 or so I ran my last minute equipment check. One strobe doesn't work -- damn! I got my keys, with Swiss army knife on ring, out to take the battery cover off to make sure I hadn't put the batteries in wrong. Nope. Oh well, no problem, that's why I have multiple strobes. Got the spare, checked it, everything fine. Toss the remaining odds and ends into the car. Barbara decided to leave her purse at home since she is going to be helping with the shoot.

Check the house; set the alarm, lock the doors and out I go. Hop in the car -- no keys. They are still on the counter in my work area where I took the strobe apart. Damn! Barbara, sans purse, doesn't have keys either. No problem, there is a key hidden in the carport for just such occasions. No there isn't -- we had given it to the woman who comes and walks our dog when we are away for the day and it was still on the stair rail where she returned it.

OK - review the bidding. Nearest kid with a key is in Ballard -- that's not going to help. House is pretty bulletproof and the alarm is set. Here comes the fun part. I took a croquet mallet and bashed one of the downstairs bedroom windows then reached in, unlocked it and opened it. (By the way, you have to bash a double-pane glass window pretty hard to break it.) There is now broken glass all over the damn place in the guest room, the alarm is screaming its head off, the dog is having cardiac arrest and howling.

OK -- reset the alarm, call the alarm monitor and tell them not to send the cops, pacify the dog, close the bedroom door to keep the dog out. GET MY KEYS. Find a scrap of drywall and the duct tape to close up the hole in the side of the house. Set the alarm again and we're on the way, only about 15 minutes behind schedule. Got to Salish lodge about 3:45. .......

Nobody from the wedding is there. Did I get the wrong place? Is there more than one Salish Lodge? About then the minister, also a friend, turned up and I sighed heavily. At least I'm in the right place.

Comes about 4:15 (remember the 4:00 picture call and 5:00 wedding) and the bride's sister (I believe) turns up "Where is everybody?" By now it is clear that we aren't going to do the photos outside since the sun is about to dive behind the ridge. OK -- Plan B, set up my hot lights in the lobby outside the ballroom where the wedding is going to be – nice looking space, nice stairway (stairways are good for group photos). The lodge wedding coordinator is very nervous with my light cords trailing all over the place so I position Barbara and two of the (by then present) younger family hangers-on to stand around and say "Be careful of the cord!" when anybody comes within about 6 feet.

Comes about 4:35 and the wedding party dribbles in. Seems that the women had all made a (planned) stop at the hair dressers for a touch-up. Alas, the hair dressers shop had been struck by a car (no kidding) and there was broken glass all over there, too. Bride is not in her dress yet.

Groom and company turned up, the van in which they were all riding had gone astray in some way that I don't recall. Remember the 5:00 wedding? I packed up my hot lights much to the relief of the wedding coordinator. Bride's sister wanders by and says "Uuummm, we don't have time before the ceremony, right?" Right.

OK -- Plan C, photographs postponed until after the cermony (the photographers' nightmare) using strobes. I did the photographs during the wedding as planned and fitted various strobes preparing to do the posed photographs in the lobby. Problem is, nobody had told me that they were going to set up the bar in the lobby for everybody to hoist one or two and eat appetizers while they set up for dinner in the ballroom.

OK -- Plan D, wait until dinner is called and everybody troops in to dinner and the lobby is empty. This did, indeed, work except that by then everybody was hungry and getting grumpy and impatient (and had had a snort or two from the bar).

To my surprize the take was not bad -- much better than I thought it was going to be.

I haven't done a wedding since.
Posted by ronfstop at 5:20 PM No comments:

The most fun I ever had photographing a wedding. 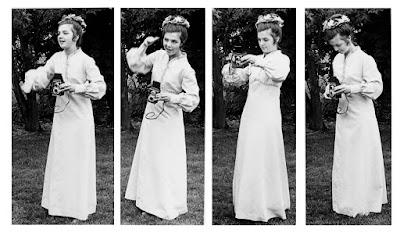 While looking through a box full of long-forgotten prints I happened upon this sequence. I don't have the negatives from this wedding. I cheerfully gave them to the bride's father, also a photographer, for him to print instead of my printing them. I wish I had the negatives for these four.

Photographing a wedding is not really my most favorite task but I sometimes do so. I usually regret it. While I'm in the "wedding photograph" mood I'll also write up the last (in both meanings: the most recent and the final) wedding that I did. But I digress.

This was a garden wedding in the backyard of a friend's rather upscale home in Buffalo, New York. Said friend was the father of the bride, a pretty young woman who had recently completed a PhD at a university in England and was marrying her British sweetheart -- as I recall he was a second freshly minted PhD. His family from England had turned up en masse for the wedding and a cheerful lot they were, too. Her family, all New Yorkers, hadn't seen her for some years while she was in graduate school so the occasion was not only a wedding but a welcome home and graduation party. Both bride and groom had assured me that there would be no drama or histrionics -- everybody got along well and I should expect nothing but good cheer.

In deference to Buffalo's steam-bath climate in July the bride's parents had rented a huge tent for the ceremony and attendees and a smaller one for the reception's food and drink tables. The weather forecast was for sunshine and afternoon temperatures in the 90s and humidity to match. The rehearsal was to be held late afternoon on Friday with the entire cast of characters going to dinner immediately thereafter, The wedding was to be midafternoon on Saturday with the picture call an hour and a half before the ceremony was due to begin . My practice is to turn up for the rehearsal -- not only because there are usually some good photographs to be taken but also to give me a chance to size up the venue and cast of characters. The bride assigned one of her bridesmaids -- the young British woman in these photographs -- to help me sort out the who's-who of the wedding party. The fact that she had never met the bride's family until a couple of days before didn't deter her from cheerfully (but not always accurately) identifying various cousins and nephews.

About a half hour before the rehearsal was to begin a very menacing black cloud appeared from the general direction of Lake Erie and we were treated to a rousing thunderstorm, slashing wind, and drenching rain. We were staying more or less dry under the tent but the thunder made sorting out the ceremony a bit challenging. The minister declared a recess and the bride's father opened a few bottles of wine. One of the groom's aunties -- looking every inch the middle-class British housewife -- cheerfully noted that the tent was ominously sagging in several places from the weight of water that had collected in valleys in the canvas. She marshalled two or three other aunties and they raided the cleaning closet in the house for brooms and mops. With a Brit-accented "Shoulder arms!" they all marched about using their weapons to push the canvas up and spill accumulated water over the edges of the tent. Disaster having been averted and the thunderstorm passed the rehearsal went on with no further incident.

The day of the wedding dawned hot and bright and, given the previous day's rain, even more than usually humid. Everybody turned up as scheduled for the picture call (a minor miracle all of its own.) The bridesmaid who had been assigned to help me asked if I minded if she took photographs also. I did not mind so she fetched her little TLR roll film camera (see the sequence of photographs above) and when I had each group posed she photographed also. She was sweet and demur but not at all averse to hustling a stray relative back in line. I liked her a lot. In about a half hour we ha all the pictures taken and my anxiety level dropped to normal. Photographing the ceremony and reception is a piece of cake by comparison to doing the posed pictures.

About the time the caterer's truck pulled up, so did another black cloud from the general direction of Lake Erie. The caterer, a man of long experience, allowed that he would not unload the food and drink until whatever the weather planned to do was finished. Good plan. We had another thunderstorm, wind, drenching rain and the mop and broom militia formed up again to get the water off of the tent. By a half hour or so before the ceremony was to begin it all blew over, the caterer got set up and all was well -- the grass under the tent was only wet on the windward side. The lawn between the house and the tent, however, was soggy and very soft as was discovered by the first arriving guest in high heels.

With a quick change of costume from nylons and heels to bare feet for both female guests and participants, the wedding took place with all good will and much laughter — as did the reception.
Ah, if they were only all like that.