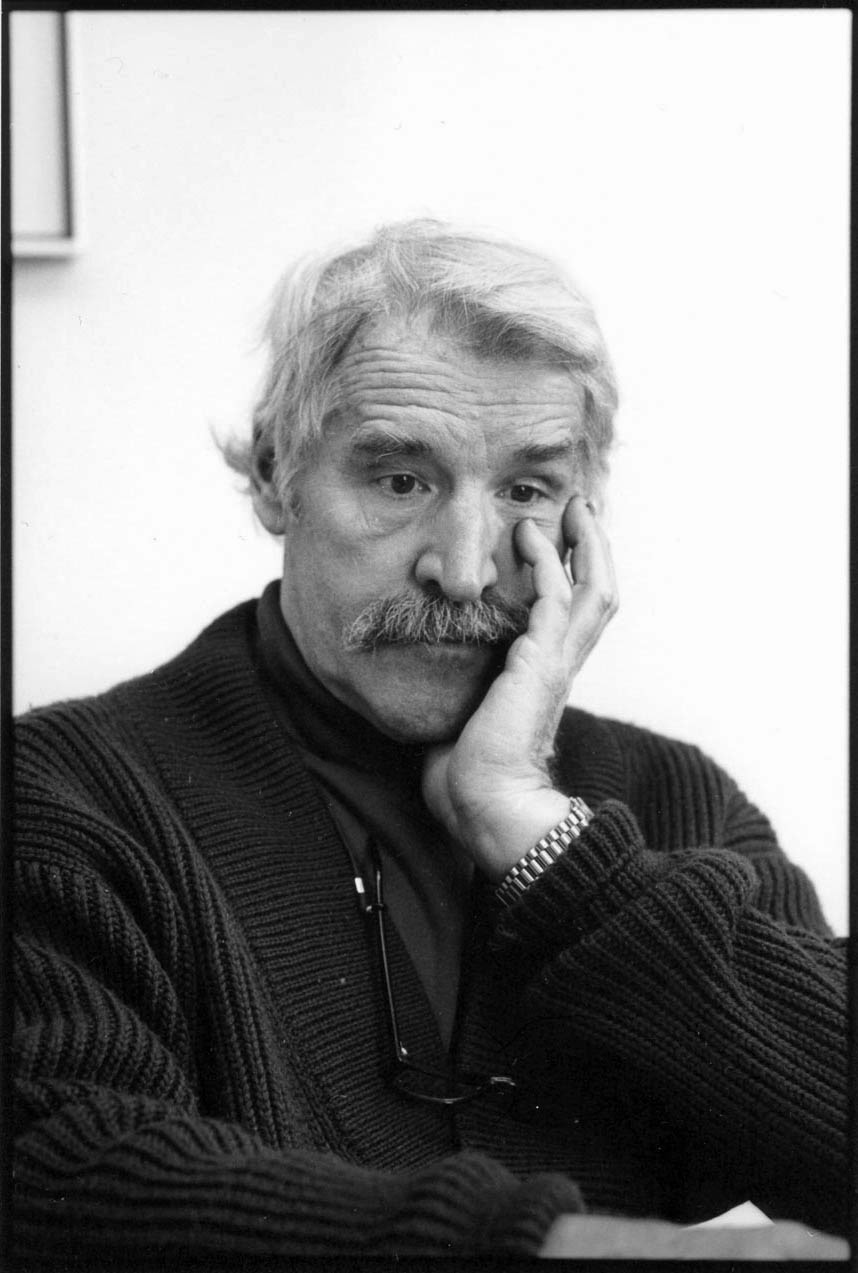 While looking for something else I found the negative of this portrait -- taken 25 years ago.  I had no idea why I didn't print it then so I printed it Tuesday.  Not a bad portrait if I do say so myself and the little scrap of picture frame in the upper left corner keeps it from looking like something taken against white seamless.  I wish that I could claim that I included it on purpose.
Before reading further, take a minute to look carefully at this portrait.  ...... Done?  Ok -- With no context it is a portrait of an older man, at ease, dark eyes not directed at the camera, thoughtful expression -- or is it wistful?  He is casually dressed and his hair is rumpled, moustache could use a trim -- clearly not a person for whom looking nattily attired and formal is important.
Here's the first layer of context.  Harold is an artist -- a well-known artist -- who draws, paints, sculpts, and does enameled metal panels.  He has works in a whole lot of museum collections and public art commissioned work in at least and .  He is also an accomplished teacher of art.  Does that change your perception?  Is his expression one of contemplating a drawing in progress, a conversation with a student, an idea for a new piece?  Is his appearance congruent with your image of a successful artist?
Second layer.  At the time, Harold, several other people, and I were instructors at a week-long workshop camp for gifted high-school students.  The students, from high schools all over the state, were incredibly smart, talented, and hardworking.  The workshops were all in the arts -- photography, drawing, theater, writing, musical composition -- except for my geekshop on artificial intelligence and one on oceanography.  At the end of the week the staff all met with the workshop organizers to debrief, relax, and congratulate each other on being able to stay ahead of the students (a daunting task).  All of the staff agreed that we had never had so much fun in the classroom or studio/classroom.  I took this photograph during that meeting.  Now what?  Is he tired from a very long but intense week with a gaggle of brilliant young people?  Is he wishing that all his classes were that rewarding?
One of Roland Barthes' hot buttons is the ability of a photograph, more than any other kind of art, to bring a rush of memory to the viewer.  (However, he takes quite a few pages to say that.)  As soon as I saw this negative the memory of what was happening at the time certainly came back to me in a rush.  I can visualize the cast of characters around the table and nearly verbatim the conversation.
The theater workshop leader, Susan, was describing her very successful week. Each evening during the week one of the workshop leaders presented a program to all the staff and students on their own work.  For her program, Susan did a series of short vignettes, portraying a different character in each one.  Between the vignettes, Susan took a few seconds on stage to become the next character --  expression, body language, posture, and accent.  Without costumes or scenery and only a few simple props, she became a stuffy male investment banker, a depressed and harried housewife, a glamour photographer’s model, a little girl upset about her first day at school -- and several others.  She was dazzling!  She was magic!  She was completely believable in each new persona.
She was not only an excellent teacher but a wonderful role model especially for the girls that (like Susan) were not particularly physically attractive.  One of her students later told me that they were all convinced that Susan could walk up the wall and across the ceiling if she wanted to.  Susan's workshop had convinced her for the first time that her own ordinary looks did not bar her from acting.
Just before I took this photograph Susan had recounted that the parents of two of the girls that had signed up for her workshop had withdrawn their daughters at the last minute when they found out that Susan was lesbian.  That's what Harold, and all the rest of us, were contemplating.
Posted by ronfstop at 7:20 PM