“Bumbershoot” was (is?) an annual festival held at over the Labor Day holiday weekend.  “Bumbershoot” as in an umbrella for a festival of music, art, dance, and general good cheer.
The notion for Bumbershoot was pretty much hatched by Anne Focke — an arts administrator for the City of Seattle — as a morale builder during the “Last Person Out of Seattle Please Turn Out the Lights” days of the late 60s as the City Arts Festival.  By 1971 it had evolved into Bumbershoot, a goofy, volunteer-powered, community event with free admission (later low cost admission) that featured mostly local music in a wide variety of styles, an extensive visual arts exhibition, and a steady stream of impromptu performances.  Each day of the festival there was at least one ad hoc parade of some kind, often accompanied by a lusty if inept brass band.
“The Big Naso” was leading one such parade. 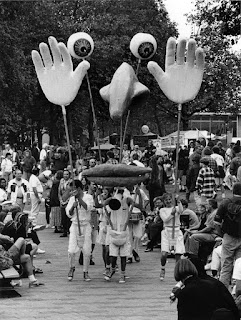 So Bumbershoot remained for perhaps thirty years.  A combination of volunteer burnout, declining individual donations and reduced support from the city during the recent recession precipitated a search for a sugar daddy to pay the bills.  Enter AEG, a national promoter of music festivals, who contracted with the city and One Reel but took over booking and management of the event.
Over the next several years, AEG morphed Bumbershoot into a high-priced, high-intensity, headliner-driven, music festival that eliminated or downsized areas for dancing, squeezed out most of the visual art, seriously restricted pop-up performances, buskers, and prohibited cameras with interchangeable lenses, ostensibly because the headliners “don’t permit photography during their performances.”
Three years ago I was denied admission even with a paid daily pass because of my vintage Canon SLR.  (Hmmm, how do the modern pancake 20 megapixel digital cameras with ISO 10,000 and 20:1 zoom lenses fit into this picture?)
I haven’t even bothered to go since then — long lines of people waiting to get into the headline venues (all staring at their smart phones) don’t seem like good photograph fodder to me.
The tide may have turned once again.  AEG, noting a precipitate drop in patronage and a national overabundance of headliner festivals, declined to renew their contract with the local One Reel organization and the city after the 2019 event — crowds were less than 50% of expected.
My opinion: good!
One Reel took over once more as the festival organizer and says: “While the details won’t be announced until early next year, we can tell you this: Everyone at One Reel is excited to usher in a new era for Bumbershoot that embraces the festival’s long legacy of multi- generational programming and community participation.  We are currently working with the City of and , to create a new model for Bumbershoot that honors both the festival’s origin and history, while ensuring the festival is sustainable for the long haul.”
My opinion: hooray!
Best of luck to One Reel, the city and a small army of volunteers.  This will be the 50th Bumbershoot and all of us ol’ timers are holding our breath.
My cameras still work.